What is Secular Humanism? 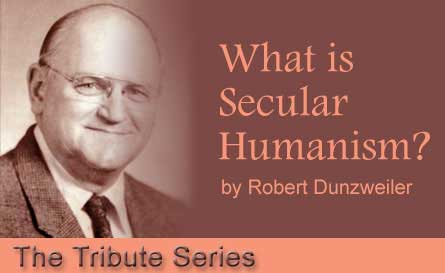 This article is one of several we will be sharing as a tribute to men who helped educate and shape the lives of other men and women of Christ through their teaching in the church, in the seminary and in their personal lives. As the publisher of idisciple.net, I would like to thank the Lord for each of these men’s lives and pray that their work here on earth, on behalf of the God of the Bible, garner many eternal blessings.

Favorite Memory: He was meticulous in nature and committed to the study of theology, the teaching of God’s Word to those entrusted in his care and encouraging others to do likewise.

Praise be to God for the life and ministry of Professor Robert Dunzweiler.

What is Secular Humanism?
by Professor Robert Dunzweiler

In 1980 a group of 58 prominent persons in the United States, Great Britain, and six other countries signed “A Secular Humanist Declaration,” a document that expresses principles and goals of a growing movement and a pervasive attitude that threatens to erode and destroy the biblical principles that have formed the core of the Judeo-Christian heritage of western culture and society. Previous to 1980, two other documents of a similar nature had appeared – Humanist Manifesto I (in 1933) and Humanist Manifesto II (in 1973). Prometheus Press, founded in 1970 in Buffalo, New York as the publishing arm of the movement, lists 175 books and booklets in its current trade catalog on various aspects of Humanist thought, including such titles as Atheism: The Case Against God, The Encyclopedia of Unbelief (2 vols.), Ethics Without God, Jesus in History and Myth, Some Mistakes of Moses, Religion Without God, and A New Bill of Sexual Rights and Responsibilities. And recently Humanists have launched a magazine to spread its views—Free Inquiry—edited by Paul Kurtz, drafter of “A Secular Humanist Declaration.”

What is Secular Humanism? The term should not be confused with humaneness, or humanitarianism, or cultural humanism, or the humanities. Paul Kurtz, professor of philosophy at the State University of New York at Buffalo, enunciates four basic principles of the view: (1) Contemporary Humanism is anti-supernaturalistic. God does not exist. There is no soul or mind separate from the brain, and man has no immortal destiny beyond the grave; (2) Human values are relative; that is, they have their source in man alone and cannot be grounded in an outside absolute source, such as God; (3) Human reason is the sole source and guide of human action; thus divine revelation as an informational source for human conduct is rejected; (4) The Humanist is committed to seek the greatest happiness for the greatest number and to further the welfare of mankind, particularly by working toward solutions to the problems of social injustice, poverty, war, overpopulation, and ecology.

Secular humanism is not a formal philosophy or philosophical world-view; it is rather an informal outlook on and attitude toward the most basic issues of existence. It is that view of life that rejects any conception of God or revealed truth, and asserts that man and man alone can and must provide his own final responses to the basic issues of life. It is secular in that, in response to the foundational questions of life, it neither allows for nor accepts definitive answers that claim to be authoritatively revealed by God. It is humanistic in that it believes that man is the only one who can provide his own definitive responses to life’s most basic problems.

This generalized outlook and attitude has roots in both the modern and the ancient worlds. In the history of modern thought Secular Humanism arose out of a background of two important developments: the first, modern philosophy; the second, modern evolutionary science.

In the ancient world this outlook on life originated very early in the history of mankind; in fact, in the Garden of Eden. When Satan enticed Adam and Eve to eat of the forbidden fruit (as recorded in Genesis 3:1-7), they had to choose one of two ways; the way of obedience and trust, or the way of sinful distrust and rebellion, as seen in their attempts to be their own gods, and to know and determine on their own what was ultimately good and ultimately evil. The first way was the way of godly humility and dependence; the second way was the way of seeking to be self-sufficient or autonomous. Adam and Eve chose the second way, and plunged the whole human race into the grievous state of sin and death. The underlying principle of this “original sin” is the desire of man to be his own god, to overthrow the word and law of God, and to substitute his own reason and standards.

At the time of Noah almost the entire human race rejected God and God’s standards of reality, truth, and value; lived by their own self-made standards and did as they pleased; and filled the earth with corruption and violence (as recorded in Genesis 6:5-13). The Lord found it necessary to destroy all but a handful of people.

After the Flood many of Noah’s descendants returned to the ways of pre-Flood mankind. They desired to establish some sort of firm memorial to their efforts that could not be destroyed or wiped from the earth, whether by a flood or some other natural calamity. They built a city and a great tower, which was to be a center of worship—worship not of God, but of man—man’s abilities, man’s power, man’s glory! But God scattered these proud men over the entire earth (as recorded in Genesis 11).

In Genesis 19 we find that the men of Sodom rejected the law of God written into their nature, and claimed the right to determine on their own what was moral and what was immoral. They decided to exercise their sexual preference, which was homosexuality; and God destroyed them all with a rain of fire and brimstone!

This attitude of rejection of God and revelation, and espousal of man-centered affirmation and value judgment is illustrated very clearly in Romans 1:18-32. There we are told that although unrighteous human beings are aware of God’s existence and something of His nature, and are aware that those who practice evil things deserve God’s wrath, nevertheless they suppress these truths and worship what they want to, and do what they want to, preferring to fulfill their desires and gratify their lusts. This is the very spirit of Secular Humanism, the attempt to dethrone the one true and living God, and to enthrone sinful, finite man!

NOTE: This article has been approved for reprint by Biblical Theological Seminary.