The Garment of Healing 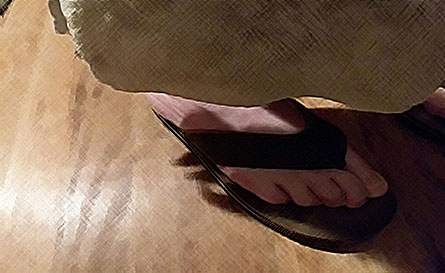 In the gospel of Mark chapter 5 verses 25 through 34 we see a very special, yet unusual meeting between Jesus and a woman who was struggling with an ongoing medical condition. The manner in which things unfolded point to the unique nature of Christ, and serves to validate who Christ is. Passages such as this underscore the challenge Christ established in the gospel of John chapter 14 verse 11 where He said, “Believe Me that I am in the Father and the Father in Me, or else believe Me for the sake of the works themselves.” The “works” He spoke of are the many miracles He performed during the course of His earthly ministry.

Mark chapter 5 verses 25 through 34 contains one of those “works” the Lord referred to.

The passage focuses on an account of a woman who had a very personal encounter with Jesus. There it says, “25 Now a certain woman had a flow of blood for twelve years, 26 and had suffered many things from many physicians. She had spent all that she had and was no better, but rather grew worse. 27 When she heard about Jesus, she came behind Him in the crowd and touched His garment. 28 For she said, “If only I may touch His clothes, I shall be made well.” 29 Immediately the fountain of her blood was dried up, and she felt in her body that she was healed of the affliction. 30 And Jesus, immediately knowing in Himself that power had gone out of Him, turned around in the crowd and said, “Who touched My clothes?” 31 But His disciples said to Him, “You see the multitude thronging You, and You say, ‘Who touched Me?’” 32 And He looked around to see her who had done this thing. 33 But the woman, fearing and trembling, knowing what had happened to her, came and fell down before Him and told Him the whole truth. 34 And He said to her, “Daughter, your faith has made you well. Go in peace, and be healed of your affliction.”

THE MOMENT
The moment the Lord found Himself in was one of great excitement. Jesus and His followers had just disembarked from the boat they were on and verse 21 of Mark chapter 5 tells us that they were met by a “great multitude.” Shortly after, a man named Jairus, “one of the rulers of the synagogue,” came to Christ begging Him to lay hands on his young daughter who was dying. Jesus agreed to go with him.

When Jairus drew close to Jesus, fell down, and began begging, the large crowd must have pressed closer to Christ and Jairus to hear what was being said. Once Christ agreed to go to Jairus’ house, the crowd excitedly pressed closer and accompanied the Lord in hopes of seeing a miracle performed.

It is important to note that Jesus had already established an impressive list of miracles. He had turned water into wine, healed a paralytic and a man with a withered hand, calmed the stormy sea, cast out demons, and so on. His stature grew with every miracle He performed. Thus, by this point, Jesus had become somewhat of a “rock star” among the common people.

THE MAIDEN
As Jesus made His way to Jairus’ house a certain woman weaved her way through the crowd attempting to draw close to Jesus. Why? Because as verse 27 says, “she heard about Jesus.” What did she hear? Most likely the wonderful “works” spoken of in John 14:11.

Hearing about the miraculous works Jesus had performed time and again, led the woman to “believe” and seek Him out. When she found Him, she saw the massive crowd accompanying Jesus and Jairus, and verse 28 says that she thought to herself, “If only I may touch His clothes, I shall be made well.”

At that point, the woman realized the best she could hope for, given the massive crowd surrounding Jesus, was to “touch His clothes.” On this day, touching His clothes would be no small accomplishment. The crowd was large and lively. It wasn’t stationary, but heading toward Jairus’ house. Thus, it would be a real challenge for someone who had been losing “blood for twelve years.”

Verse 25 describes the woman’s condition as having had a “flow of blood for twelve years.” Most likely this was some sort of slow yet steady internal blood loss. Verse 29 refers to it as the “fountain of her blood.” This would indicate the source of the blood loss.

During the course of her twelve-year struggle, most likely the woman became anemic. This in and of itself would create some challenging symptoms.

When discussing potential symptoms of anemia, the Mayo Clinic says one may experience things such as lightheadedness, difficulty breathing, chest and abdominal pain, and even fainting. As a result, when this woman attempted to traverse this large crowd, she very well may have been feeling lightheaded, faint, in pain and having difficulty breathing. If that’s the case, her short journey to Jesus, may have felt near impossible. Nevertheless, this woman of great faith and determination set her eyes and heart on Christ and made her way into the large crowd.

I knew a fellow who purchased a brand-new van. It was the lemon or lemons. The first year he owned that vehicle, it was literally in the shop most of that year. In the end, the dealer was unable to fix all the issues and he had to trade it in. The fellow was emotionally spent. How much more challenging must of it have been for this poor woman who not only suffered from blood loss for twelve years, but suffered from the treatment multiple physicians prescribed.

Initially, the woman had placed her faith in poorly educated physicians and was greatly disappointed. But now, against all odds, sick and weak, she was going to do her best to hobble and crawl her way to Jesus—the Great Physician! (Mark 2:17).

THE MIRACLE
At some point in her journey to Christ, she trusted that only Christ could heal her. Given her expressed thoughts and personal actions, this woman’s faith was immense.

Battered and weak, she slowly made her way through the giant crowd, hoping to merely “touch His clothes.” She thought that if she could merely touch the Lord’s garments she would be healed.

Was she disappointed? No. After merely touching Christ’s “garment” the Bible says in Mark chapter 5 verse 29, “Immediately the fountain of her blood was dried up, and she felt in her body that she was healed of the affliction.”

The power Christ bore was mighty indeed. Somehow, by merely touching His garment, healing power passed from Christ to the woman and she was completely healed. This brave woman’s journey was over. Twelve years of suffering were gone in a flash!

In the gospel of John chapter 14 verse 1 the Lord said, “Let not your heart be troubled; you believe in God, believe also in Me.” This woman’s heart was no longer troubled, for she had touched the Savior and was miraculously healed.

It is important to note that Jesus did not heal every person He passed by, but He did heal many. The greatest healing one may encounter is not one of the body, but of the heart. This woman’s body and heart were not healed by the Great Physician.

Over the centuries, many have claimed greatness, but only One has truly validated it over and over again—the Lord Jesus Christ.

In the gospel of John chapter 14 verse 6 Jesus said, “I am the way, the truth, and the life. No one comes to the Father except through Me.” A very bold statement that Jesus backed up many times throughout His earthly ministry.

Just as the woman made her journey to Jesus and was not disappointed, we too can make the journey. But that is a personal choice only you can make. No one can force you to make the journey.

THE MISSION
As we search for deeper meaning in what took place between the woman and Christ, something very interesting stands out. In the book of Leviticus God established certain laws that focused on ceremonial uncleanness for both men and women. In chapter 15 verse 25 we see one such law. The law deals with women who have “a discharge of blood for many days.” If the issue continues for a period of time the woman is considered “unclean.” Verse 27 adds that if someone comes into contact with such a person during that time, they too are considered ceremonial unclean. In other words, the person could not go to the temple until the situation was resolved.

In what way is this relevant to our passage? Simply put, the woman with the discharge of blood was ceremonial unclean, and anything or anyone she touched was unclean as well for seven days. When the woman touched Jesus’ garment, it became unclean.

As the Son of God, Jesus took such things seriously. We know this to be so because of the message He shared in Matthew chapter 5 verse 17, “Do not think that I came to destroy the Law or the Prophets. I did not come to destroy but to fulfill.” The Law was of great importance to the Lord.

Interestingly, the account between the woman and Jesus, illustrates Christ’s earthly mission, the salvation experience between the sinner and the Savior.

In our uncleanness, our sinfulness, like the woman, we too come to Jesus. Like the woman, He not only receives us, but at Calvary, He took upon Himself, our uncleanliness for the purpose of cleansing us and making us spiritually whole. The Lord’s sacrificial act therefore allows us to have fellowship with God.

The wonderful thing about this is that no matter how impure, no matter how lacking, no matter the obstacles that stand before us, if we, by faith, make our way to Christ, like the woman, we will not be turned away or disappointed.

The apostle Paul makes the abundantly clear when he says in Romans chapter 8 verse 38 through 39, “For I am persuaded that neither death nor life, nor angels nor principalities nor powers, nor things present nor things to come, 39 nor height nor depth, nor any other created thing, shall be able to separate us from the love of God which is in Christ Jesus our Lord.”

The woman bravely fought the good fight and was rewarded in the end. Let us look to her wonderful example of faith and trust in Christ to encourage us to embrace a deeper and fuller walk with Him.