The Atheist and the Cabin 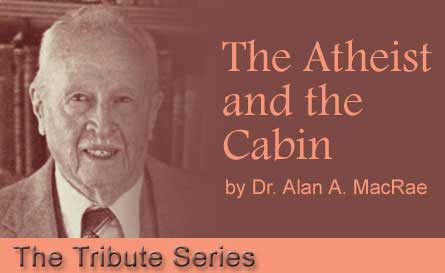 This article is one of several we will be sharing as a tribute to men who helped educate and shape the lives of other men and women of Christ through their teaching in the church, in the seminary and in their personal lives. As the publisher of idisciple.net, I would like to thank the Lord for each of these men’s lives and pray that their work here on earth, on behalf of the God of the Bible, garner many eternal blessings.

Dr. Alan A. MacRae [1902 – 1997] – Co-founder of Faith Theological Seminary and Biblical Theological Seminary. Dr. MacRae, in spite of his vast knowledge of the Bible and Theology, was a wonderfully humble man who strove to put the Lord first. The esteemed Christian theologian and philosopher Francis A. Schaeffer referred to Dr. MacRae as his mentor. Schaeffer also credited MacRae with “instilling in him a biblical hermeneutic that emphasized not only the trustworthiness of the Scriptures but also the literal (or premillennial) understanding of prophecy.”1 His list of accomplishment are too many to list under the circumstance.  You may read more about his life by using the link below.

Favorite Memory: As a student at Biblical Theological Seminary in the 1980’s, I had the opportunity to hear Dr. MacRae speak in Chapel and amid the students in the hallways of the school. My favorite memory of him was during a Chapel service when he spoke about his relationship with Christ. While addressing the student body, he recalled that he came to Christ at young age, and as an adult in later years, he felt the need to go before the Lord and confirm his spiritual standing.

Dr. MacRae said that while reflecting on his life and how he came to Christ, he felt the need to make certain that he confirm his trust in Christ as Lord and Savior. As a result, he humbly spoke to the Lord to reaffirm as a man, that which he did as a youth.

This act of humility before the student body spoke volumes to me. To think, such a highly educated and esteemed man standing before the student body and confessing his need to make sure he was right with Christ. He did so not because his  faith had wavered, but to simply assure his heart and mind of the commitment he made long ago.

By his example, Dr. MacRae taught me that regardless of education or accomplishment, one need not fear to openly display the frailties of one’s humanity before others, but to embrace it as a strength and challenge others to take this step very seriously.

Praise be to God for the life and ministry of  Dr. Alan A. MacRae.

The Atheist and the Cabin
by Dr. Alan A. MacRae

Once I dreamed that I walked through a beautiful forest with an atheist friend. As we followed a winding trail, my friend explained his understanding of the universe. He said,”There is no reason for believing in God. Science has shown that everything can be explained by natural causes.”

After a while we came to a clearing. In the middle of it stood a rustic log cabin with smoke curling up from its chimney. I turned to my friend and said,”How fascinating it would have been to stand here and watch the forces of nature that produced this cabin. There must have been a very strong wind to cause trees to fall in such a way that the loose branches would all be lopped off, while the trunks would land in such a way as to produce the four walls and roof of this little cabin. If one could look back through the centuries, it would be fascinating to know whether the whole area here was covered with fallen trees and some process of erosion removed all except those that are now part of the cabin, or whether the wind was so selective that only those trees fell that form its walls and roof.”

We noticed the small windows, and I said,”How fascinating it would be to see the natural processes at work that produced these windows. I wonder what caused the logs to fall at exactly such an angle as to produce these rectangular holes, and what sort of chemical or volcanic process caused the various minerals to flow together in such a way as to produce panes of glass exactly the right size to fit the apertures in the walls of the cabin.”

Then I noticed the smoke rising, and said in excitement. “There is evidently a fire in the cabin. We must run quickly and put it out before the cabin is destroyed.” The friend replied,”There is no need to hurry. The fire is in a little stove, and the smoke is coming out through the stovepipe. It can’t set the cabin on fire.” I said,”What was the natural process that brought iron to this spot, molded it into the shape of the stove, and made it possible for a lightning storm to produce a fire within the stove, and yet not injure the rest of the cabin? I would also like to know about the forces that, doubtless over a long period of time, produced the cylindrical pieces of iron that carry the smoke up from the stove so that it goes into the outer air instead of filling the cabin.”

My friend paused in his meditation over the marvelous forces that had accidentally produced this universe and the scientific principles that can explain every detail of its construction. He turned to me with disgust. “Are you out of your mind?” he said. “It is obvious that no natural processes formed this cabin. Probably someone cleared the space in the forest. Someone cut the logs to the right length and arranged them, one on top of the other. Someone cut holes in such a way as to make apertures of exactly the right size for the windows. Someone took sand and other necessary materials and produced the glass, cut it exactly the right size, and put it into the windows. Someone took metal from the ground and shaped it into the right size to produce the stove and to make the pipes that carry the smoke out of the cabin. It is perfectly obvious that some man built this cabin.”

I said,”Have you seen this man?” He said,”No.” “Do you know his name?” “No” “Have you ever talked with him?” “No.” “What proof do you have then that such a man exists?” He looked at me with irritation. “It is perfectly obvious,” he said,”that some man planned the cabin, bought the materials, fit them together, and produced it.” I answered,”You cannot believe that natural forces, acting simply in relation to scientific laws, produced this little cabin; yet you suggest that the mighty universe, with all its intricate features working together so harmoniously, came into existence by purely natural causes.”

I woke from my dream more convinced than ever before that God exists; that God established the laws of nature; that God controls these laws; that God has His own purposes, desires, and intentions; and that He works all things together for good to those who love the Lord.

This short story was written by Dr. MacRae and published in the Biblical Bulletin. We would like to thank R. Todd Mangum, PhD, Academic Dean of Biblical Theological Seminary for the schools permission to re-print and share Dr. MacRae’s story.

NOTE: This article has been approved for reprint by Biblical Theological Seminary.