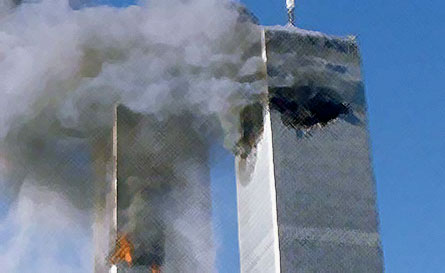 In the summer of 1976 a friend of mine and I were in Manhattan. While there, we stumbled across the filming of the final scene of the movie King Kong. They were looking for extras to gather around the dead body of Kong, so we happily embraced our role as extras in an Academy Award winning movie (won the award for Best Visual Effects).

As we entered the location where Kong laid, I realizing that we were standing in the plaza of the World Trade Center. I recall how big those towers looked that evening and how small I felt standing between them.

Twenty five years later I was in Manhattan once again for some training. The location was across the street from the plaza where Kong once laid. Only a portion of a tower remained amid the rubble. Near the site, rested many photos, letters, posters and other mementos left in memory of those who perished when the towers fell. Seeing the site and the makeshift memorial emphasized the reality of what took place weeks earlier.

George Sleigh, a well-known survivor of the September 11, 2001 terrorist attack on the World Trade Center, is a friend and a well-respected Christian I attended church with years ago. George has been featured on various programs, news web sites like CNN, USA Today and has spoken at a number of special events.

George was on the 91st floor of the North Tower when hijackers flew the American Airline Boeing 767 into the building a few floors above him. The plane was so close to George’s office that moments before impact he was able to see people in the cockpit.

As his office began to collapse around him, George said that he dropped the phone, covered his head, knelt forward in his chair and prayed to God, “deliver me from this thing, and in His mercy He did, and I was able to crawl out of that space without any injury.” Twice that day George cried out to the Lord for deliverance and God honored his pleas.

Interestingly enough, George said that no one above his floor survived the attack.

GOD IS OUR REFUGE AND STRENGTH
When I think of George’s experience Psalm 46 comes to mind. There it says, “God is our refuge and strength, A very present help in trouble. 2 Therefore we will not fear, Even though the earth be removed, And though the mountains be carried into the midst of the sea; 3 Though its waters roar and be troubled, Though the mountains shake with its swelling.”

As the jet approached, the building shook and the office began to collapse, Superman was not there that day to save George. Superman was nowhere to be found. It was just George and God. At that moment, George realized his options were very limited. Instinctively, George did that which came natural to him, cry out to God!

The word translated refuge literally or figuratively means “a shelter,” a place of “hope” and “trust.”

The Lord always is and always has been the believer’s place of refuge, but sadly, far too often, for far too many, this only becomes evident when crisis engulfs us. This reminds me of the old saying, that “There are no atheist in foxholes.” Whether this adage is a certainty or merely a fairly good generality, the point is that when one’s very existence is threatened, calling on God becomes natural and easy, especially for those who are used to calling on Him daily.

Not only is God our refuge, but the passage says that He is likewise our “strength.” The word strength comes from the root word that denotes “force, security, might, power” and so on.

GOD IS A PRESENT HELP
It’s great to know that God is our refuge and strength, but what good does that do us if He is out of sight and out of mind? No good at all.

The Lord is not out of sight or out of mind. Rather, as the Psalmist notes in verse 1 that He is “A very present help in trouble.”

God is not just present, but “very” present! God is “vehemently” present. And by implication He is wholly, diligently, exceedingly present for us.

During times of great stress and trouble, we are tempted to question God’s provision and presence. In 2 Kings 6 we see a situation in which the king of Syria sent a “great army” to grab the prophet Elisha. The army surrounded the city the prophet was in, yet he did not fear or fret. His servant however did fear the great army and said to Elisha in 2 Kings 6:15 “Alas, my master! What shall we do?”

The Bible says in verse 17 that Elisha prayed to God saying, “Lord, I pray, open his eyes that he may see. Then the Lord opened the eyes of the young man, and he saw. And behold, the mountain was full of horses and chariots of fire all around Elisha.”

Elisha did not fear because he had eyes of faith. He could see something no one else could see. He could see a mighty force provided by God that far surpassed the army of the king of Syria.

Regardless of whether we can see or grasp God’s provision, it is always among us, for God is “A very present help in trouble.”

WE WILL NOT FEAR
The by-product of knowing the God of refuge, strength and presence is seen in Psalm 46:2. There the Psalmist says, “Therefore we will not fear.”

Recognizing God as He is should lead us to avoid fear, and to the degree that we embrace such things, we indeed will do so.

This is not to say that great men and women of God do not fall prey to fear at times.

In 1 Kings 18 the prophet Elijah fearlessly stood fast with and for God by facing down and defeating several hundred prophets of Baal and Asherah in a test of God versus their gods. This was a great moment for Elijah, yet in 1 Kings 19 we see this same prophet running for his life when he finds out that the wicked queen Jezebel sought his life.

This likewise holds true for the apostle Paul who said in Philippians 4:6 “Be anxious for nothing,” yet, in 2 Corinthians 1:8 he said, “we were burdened beyond measure, above strength, so that we despaired even of life.”

At times, even the greatest examples of godliness have fallen prey to fear, but it ought not characterize and dominate our lives. Rather, as we look to Jesus as Hebrews 12:2 encourages us, we find that there is a reason and a means of replacing fear with hope in God.

The Psalmist underscores the extent and degree to which we ought to displace fear with hope saying in Psalm 46:2-3, “Even though the earth be removed, And though the mountains be carried into the midst of the sea; 3 Though its waters roar and be troubled, Though the mountains shake with its swelling.”

As much as our physical death may seal our earthly demise, more importantly, it will likewise usher in our eternal splendor.

BE STILL
How does one put things into perspective when everything is falling apart around them?

Our only hope when all else is failing us is to stop, quiet ourselves, focus on the big picture and see God for who He is. Let God, be God.

When all else is falling apart, it is unnatural for we humans to be still, but that is what God calls us to do, be still. In many ways, it is impossible for mere humans to do so, but to the extent and degree in which we humble ourselves to the filling of the Holy Spirit, the Spirit Himself helps bring about the quiet and the calm.

Being still is essential, but recalling God’s promises is likewise important as well. Meditating on passages such as Romans 8:31 “If God is for us, who can be against us?” can go a long way in helping us to allow fear to be replaced by hope.

Another passage that has proven very helpful during times of struggle is Galatians 2:20,
“I have been crucified with Christ; it is no longer I who live, but Christ lives in me; and the life which I now live in the flesh I live by faith in the Son of God, who loved me and gave Himself for me.”

If we have truly been “crucified with Christ,” then we are dead. If we are dead, then this in and of itself ought to put things in greater perspective.

As we saw in the examples of Elijah and Paul, one moment we may be firmly centered and focused on God to such an extent, that we fear nothing. In the next moment, we might find ourselves running for our lives or in absolute despair. Do such failures make us any less in God’s eyes? No of course. But it is important to remember, “God is our refuge and strength, A very present help in trouble.”

Be it the Syrian army of Elijah’s day or the 911 terrorists of today, God is still in control. God is still our refuge and strength. And God can be counted on not only when your office is collapsing around you as in the case of George Sleigh, but also even if the earth itself be removed.

O God, our help in ages past, our hope for years to come, our shelter from the stormy blast, and our eternal home.

Under the shadow of thy throne, still may we dwell secure; sufficient is thine arm alone, and our defense is sure.